Welcome to a Biography of

I was born at the railway station-house in the village of Ballyhale, Co. Kilkenny, Ireland. My father was the stationmaster and my mother a hard-working housewife and mother to six children, five girls and myself, the only boy. Ireland in the 1950’s was a very poor, mainly agricultural country with a high level of immigration. We lived in a rural area, where those fortunate enough to have Jobs counted themselves lucky. There was little time or money for leisure activities and when the oppertunity arose, the people made their own entertainment, which was mainly Gaelic games, music and dancing. My mother had a most beautiful singing voice and she would sing for hours while doing the housework, sometimes along with the radio. She probably could have enjoyed a wonderful career as a professional singer, but for the fact that she was busy raising a family and keeping a home. It is my good fortune therefore to have inherited her great singing talents and warm personality which have inspired me over the years on and off the stage and which I’ve come to regard as a real treasure. Apart from my mothers home-made singing performances in and around the house one of my earliest musical memories is of attending a local “country fair” and hearing live music being performed on stage for the first time in my life. I still remember some of the songs and tunes I heard that day when I was just about 3 years old listening to Peg and Bobby Clancy at Piltown Fair in Co. Kilkenny.

Co. Clare
My fathers job involved moving to a different part of Ireland every few years and that is how we came to live in West-Clare. It is said that the true home of irish traditional music is Co. Clare and this is where my family enjoyed many memorable years, indeed we still feel a strong bond with Co.Clare to this day. We lived in the small market town of Ennistymon not far from the atlantic coast, where i attended School for the first time at the nuns convent School. The nuns were very nice and really good teachers and i soon learned my first words of gaelic, lots of stories and songs along with the usual basic subjects. Co.Clare was always full of music and house dances were very popular, where nearly everybody could dance what was called a Set. The music was usually provided by 3 or 4 musicians who also sang the occasional song, the likes of Willie Clancy, Chris Droney, Jimmy Ward and Junior Crehan were very popular musicians. The bigger dances were held in parish halls where the music was played by the bigger Ceìli Bands like "the Tulla" and "Kilfenora". In the summer months we spent lots of time by the sea at Lahinch, which was only a couple of miles away, swimming in the atlantic ocean, playing on the beach or enjoying great picnics in the huge sand dunes. Sometimes we would travel further up the coast to the "Cliffs of Moher", ending up in Doolin to watch the fishermen and have a cool glass of lemonade in "Gussie O’Connors Pub". If we were lucky enough we might sometimes hear the Russel Family: Miko, Packie and Gussie playing some great traditional music in the local style. Co.Clare and the famous West Clare railway are well documented in song and story particulary by people like Percy French. By the time the railway closed in 1961, my fahter who was the last stationmaster had many’s the great story of his own to tell.

Co.Waterford
After the West Clare railway closed we moved to Co.Waterford. The beautiful town of Cappoquin nestles at the foot of the Knockmealdown Mountains in west-Waterford not far from the Ring Gaeltacht. Here is where the river Blackwater turns south for the sea at Youghal and where I spent some of the happiest days of my life. After a short time at the local convent school with the nuns, I attended the Boys National School. I was very fortunate to have a most wonderful teacher in Mrs. Scanlan and as a result my grades went from strength to strength , my Gaelic language skills in particular. I also learned Irish dancing from a travelling dance teacher, Mrs. Hallahan, who visited our School on Wednesdays and I became quite expert after a short time. Around this time also my father bought me an accordion and I learned the basic skills from an old gentleman called Pop Sargent, sometimes Pop and his wife would sing along while I played, it was great fun. Pop also ran the local petrol filling station-garage and i would often see the famous Hollywood movie-star Fred Astaire who holidayed in the area, tanking his car at Pops place. I hung out with a small group of boys my own age, whom I’ve come to refer to affectionately as "The Huckleberry Finns". When we were not fishing or swimming in the river, we were playing hurling or having one of our adventures around the town and surrounding countryside. I often helped the local famers, especially during the sugar-beet harvest or spent hours at Lonergans tailor shop listening to stories, debates and discussions while the tailors worked and sat cross-legged on the high table. While visiting a friends house one day I heard "The Clancy Brothers and Tommy Makem" for the first time on LP. I was both amazed and excited at what I was hearing, the songs, the singing and most of all the great sense of fun. I began to take an interest in the, mainly, variety shows that took place at the local hall. I later got involved with a local theatre group and soon got a part in a production of P.H. Pearse’s Iosagàn. I also took part in many variety shows where i was able to show-case my acting, singing and dancing talents, sometimes sharing the stage with famous names in show business and entertainment from the area. When the time came to leave Cappoquin and West Waterford I was heartbroken. The family were moving to the most northerly part of Ireland any of us had ever been before, this time with only my father, my mother, my younger sister and myself. The rest of the girls had left home for the real world.

Co. Louth
We lived for about four years in Co. Louth (the wee county) just outside the town of Dundalk, where I attended the Christian Brothers School. In this part of Ireland men played Gaelic football and people followed the sport with a passion. After my near star-like status on the hurling fields of Co. Waterford, Gaelic football in Co. Louth took a back seat, as did School and any academic ambitions I may have had. My friends, for the most part, were young farm workers from the area and I enjoyed their company immensely. An old record player landed in our house around this time, along with LPs , including some from the Dubliners and the Chieftains, i decided that this was my kind of music. I began to learn some of these folk songs, and used my mothers old plastic basin (bowl) as a Bodhràn. At School holidays and harvest time I worked in the fields with my friends and at the weekends we drank beer, told stories and sang songs together before ending up at the local dance hall. In the winter months I took part in small variety concerts at the parish hall and the great Tommy Makem , who lived locally at the time would occasionally come by as did "The Sands Family" who often performed in the area.

Dublin
We finally left Co. Louth and the family moved to Dublin, our first time to live in a big city. Needless to say I was very excited and settled in to city life quite easily. Ireland from the 1960s into the 1970s was at fever pitch with what became known as the "Ballad Boom", along with that came the great traditional Irish music revival led for the most part by bands like The Chieftains, Planxty and De Danann. Dublin was the nerve-centre of all this great music and I could not have landed in a better place. I bought my first real Bodhràn (Irish folk drum) and also began to learn the tin whistle, in no time at all I was a regular at the many traditional music and ballad sessions in the city centre. I got to know many of the top musicians, in places like Ò Donoghoes, The Brazen Head, The Van Gogh and The Stags Head, eventually many of us formed our own Bands. Much of my free time in the 1970s was spent travelling to festivals and traditional music weekends around Ireland which gave me the opportunity to re-connect with Co. Clare. In 1978 I played my first big concert with the Band "`Na Seanachi" at the famous Ballyshannon Folk Festival, sharing the stage with "De Danann" and "Na Fili" plus many other big names. During the 1970s also, a mighty wave of Irish-Celtic Culture was gathering strength and spreading rapidly throughout central Europe and further afield, I decided this was an opportunity I could not miss. In 1980 I formed "The Anna Liffey Folk" group with my friend Pauric Mc Neela from Co. Mayo and started touring the world.

Germany
I decided to base myself in Germany and settled in the then divided city of Berlin. I was part of an unique community of artists and entertainers from around the world, resident in West-Berlin at the time. I like to think we played a vital role, entertaining the local population during the "Cold War" years. I have since played and recorded with a number of Irish folk groups including: AnTàin, The Irish Weavers, Inish and with the band Tailteann, travelling and performing mostly throughout central Europe, Australia and America. Along with touring regularly throughout Germany, I have twice taken part in the very prestigious "St. Patricks Day Celebration" Tour of Germany, Switzerland and Austria playing to audiences in excess of thousands of people. I am perhaps best known for my unique singing voice in both folk and tenor styles. Over the years I have perfected a strong entertaining stage craft that’s both natural and professional, among other musical instruments, I play whistles and percussion. Along with making many radio and TV appearances over the years in various countries I have recorded and performed live in the Deutschlandhalle Berlin with Germany’s famous Singer-Songwriter Reinhard Mey. On my travels around the world I’ve met many of the bands and artists that influenced and inspired me, like the Dubliners, De Danann, Christy Moore and others. We have raised manys the glass together and celebrated the music we love. In recent years I have taken to organising the occasional cultural event, most notably The Berlin Irish Summer Folk Festival. I also work on a regular basis with the cultural department of the Embassy of Ireland Germany. At the moment, I perform with my own band “The Robbie Doyle Band”, which includes top-class musicians from both Ireland and Germany. Along with that, I am at present working on a solo project with the title “My Ireland – My Green Ireland”, which will include photos, music, songs and stories.

In 2020, I celebrated 40 years on stage with my latest album “Many´s the Mile” which has proved a great success.

I look forward to meeting you all soon at one of my concerts, events or festivals. 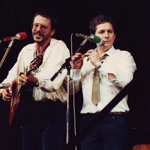